Which countries have laws against FGM?

The first national law worldwide was passed in Guinea Conakry in 1965.

In 2020, a consortium of two regional networks, the End FGM EU Network and the US End FGM/C Network, together with the NGO Equality Now (Kenya), published a global report on FGM in which they found that 92 countries are known to practice FGM and that only 55% of them (51 countries) have specifically prohibited FGM under their national laws, either through a specific anti-FGM law or by prohibiting FGM under a criminal provision in other domestic laws such as the criminal or penal code, child protection laws, violence against women laws or domestic violence laws. The organisations called for a recognition of the practice as an international issue requiring a global response. (End FGM EU Network, US End FGM/C Network, Equality Now, 2020)

According to the same report, laws against FGM are most common on the African continent followed by continents where FGM is practiced by diaspora communities, such as Europe, Noth America, Oceania. However, in Asia legal frameworks against FGM are more rare. In the Middle East, Iraq (Kurdistan) and Oman have specific laws or legal provisions banning FGM.

Most other Asian countries have not enacted a specific legal prohibition against the practice but according to the Global Platform for Action to End FGM/C and their 2020 Global Report on FGM/C, things are starting to change as several countries have enacted laws in recent years.  (End FGM EU Network, US End FGM/C Network, Equality Now, 2020 ; Global Coalition to End FGM/C, 2020 )

There are no specific laws or legal provisions against FGM in Latin America. (End FGM European Network et al. 2020)

The 2020 Policy brief by the UNFPA and UNICEF, looks at the legal framework in the 31 countries where national prevalence data is available for FGM. Out of these, 22 per cent do not have a law criminalizing the practice. That means that 78 per cent of affected countries (with available data) do prohibit or criminalize FGM. According to the UN agency, “legislating specifically on female genital mutilation appears to be a signal of strong political will”. Those laws that are effective generally combine  superior law such as the constitution with amendments to the penal/criminal code on FGM, harmful practices or gender-based violence. Nevertheless, some countries prohibit FGM in the constitution (Somalia) or through federal laws (Nigeria), but these frameworks are not sufficiently implemented at regional levels. (UNFPA, 2020) 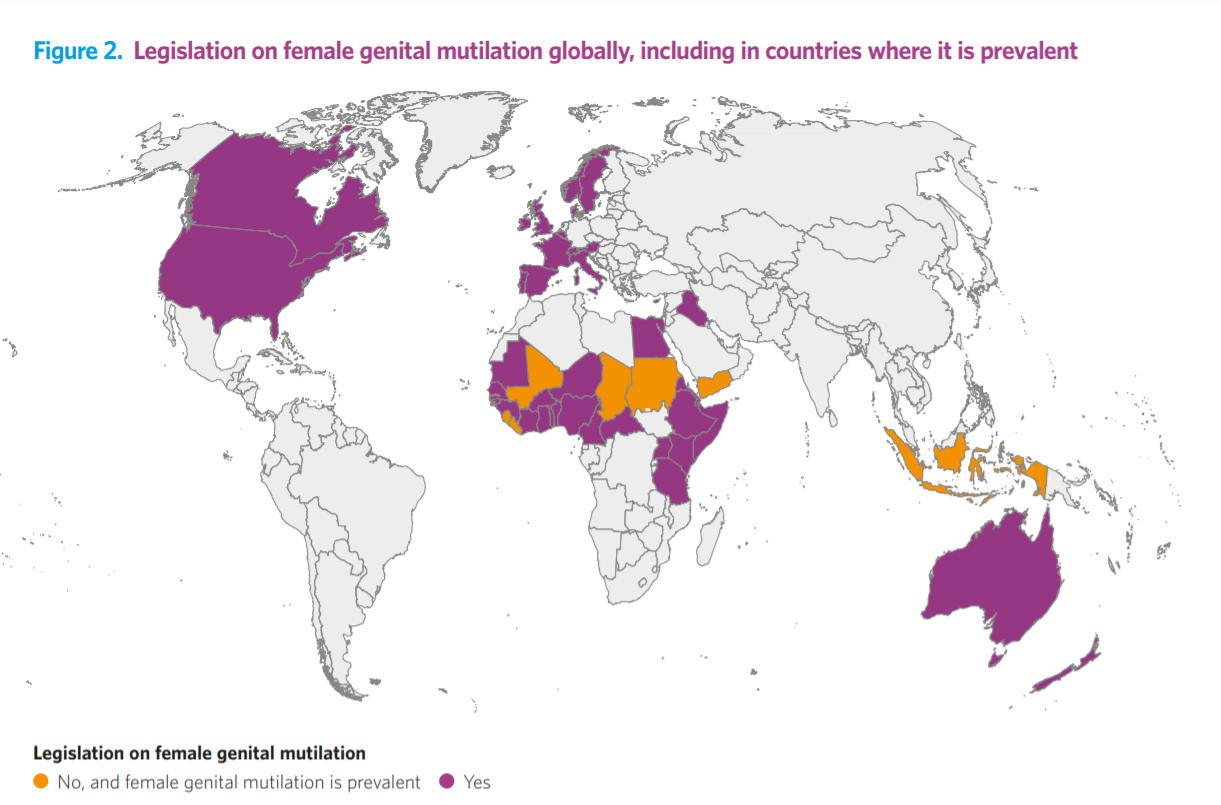 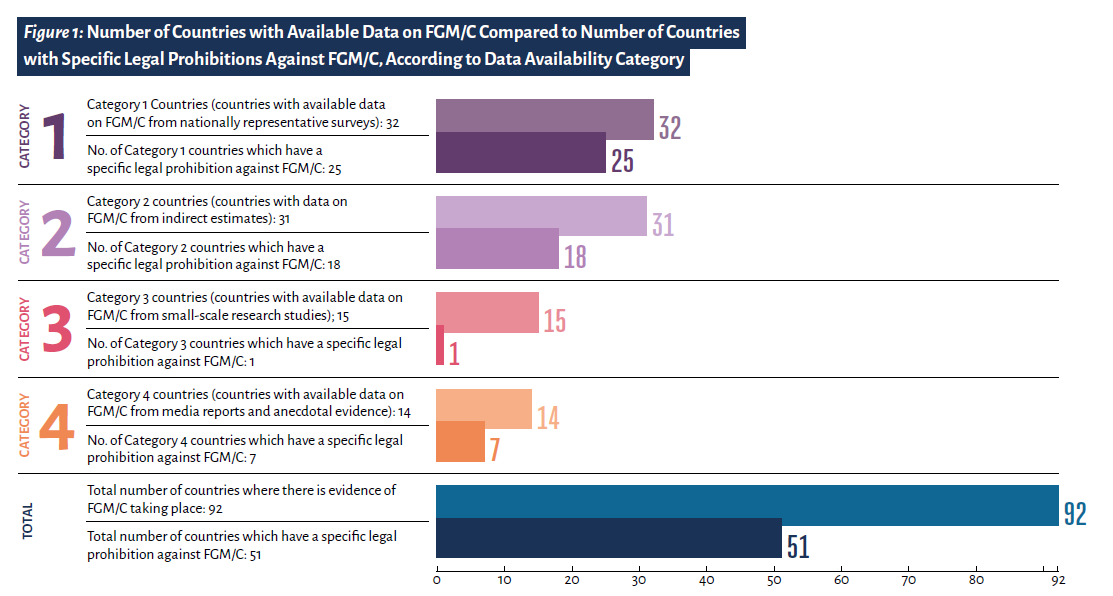 What do national laws say

Several African countries where FGM is illegal lacked a clear definition of what constitutes FGM in 2019 (Cameroon, Ethiopia, Nigeria and Tanzania). At the time, two countries only prohibited the performance of FGM if the girl is under 18 years of age (Mauritania and Tanzania). In 18 countries it is illegal not only to perform FGM but also to arrange and/or assist in the act of FGM.

Moreover, in half of the 22 countries with anti-FGM laws in place, there was a legal requirement to report knowledge of FGM. The NGO argues that all countries should widen the responsibility to report FGM so that those who fail to do so could be persecuted. Concerning medicalized FGM it is only specifically criminalized in 9 African countries while some laws, on the contrary, provide “loop holes” for FGM practiced by medical professionals (ex Egypt). (Aha Foundation, 2019 )

The penalties for performing FGM vary from one country to another, from a few months’ imprisonment, to monetary fines, to a life sentence in prison. The African countries with the longest maximum prison sentences are Cameroon (20 years) and Tanzania (15 years), while those with the highest fines are Benin, Côte d’Ivoire and Kenya. African countries with the lowest penalties overall are Ethiopia, Guinea, Niger, and Sudan. (Aha Foundation, 2019 )

In Europe and other low-prevalence regions, girls are considered particularly at risk of being cut when travelling to their country of origin or the country of origin of their parents. Therefore, most European countries as well as Australia and some US states, have a “principle of extraterritoriality” in their law, meaning it is possible to prosecute acts of FGM committed outside a country’s borders. The application of this principle differs from country to country: the offender and/or the victim must often be a citizen or resident of the country concerned. In some cases FGM must also be illegal in the country where it took place. (Johnsdotter S. 2019)

For more information on the situation in specific continents and/or countries please see the in-depth articles.

Portugal: A first FGM sentence is suspended after appeal

Law and FGM in Asia

Chad: a legislative situation in the process of being implemented

Legislation against FGM in North America