Anti-FGM activists were at the NGO CSW 65 Forum

The CoP on FGM and its members participated in the NGOCWS65 Forum which took place in parallel with the 65th Commission on the Status of Women, between March 14th and March 26th 2021. This year, because of the sanitary crisis, the CSW and the NGOCSW Forum took place in a hybrid form with virtual meetings. The NGO Forum gathered 25 000 participants from all over the world around a very diverse programme.

Some conferences specifically addressed the issue of Female Genital Mutilation :

The Global Platform for Action to END FGM/C held a parallel event entitled “Partnerships to Accelerate Global Action to End FGM/C by 2030″, on March 24th.

Topics covered included medicalization of FGM in Indonesia, the important role of Youth in the work against FGM and mental health of survivors.

Maryam, who is also a member of the CoP, shared her painful experience of FGM and together with other speakers she stressed the importance to reject all cultural relativism around FGM and to speak about the practice as the violence and human right’s violation that it is.

“I am an FGM survivor. I was cut at age 6, I remember everything, the pain, the smells, the laughter of the cutters.  Every time someone belittles the cause or questions it, I go back to that space. No one can ever forget it. It shares a lifetime with you.” 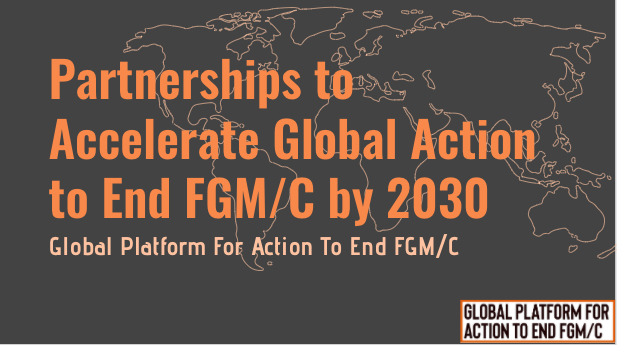 Mental health and well-being of survivors was also addressed and speakers stressed the importance of a survivor-led movement against FGM, which includes both Youth and older generations. However, while giving space to survivors we must not forget their experience of trauma and their need for support. It can never be an individual survivor’s responsibility to fight against FGM.

The conference “FGM/C is our issue too: Voices from Asia”, organized by the  Asian Network to End FGM/C, which was founded by ARROW and The Orchid Project, highlighted the reality of FGM in Asian communities.

For a long time, it was thought that FGM was an “African practice”. However, as data has become more available, the understanding of the practice as a global concern has increased.

Currently only two countries in Asia have representative survey data on FGM: Indonesia and Maldives. However, additional evidence suggests that FGM is present in local communities of 8 countries: Thailand, Philippines, Malaysia, Singapore, India, Pakistan, Bangladesh, Sri Lanka. This data shows great variations in terms of the size of affected populations and the forms of FGM that are being practiced. The conference enabled us to gain better understanding of the practice of FGM in some of these communities.

Key findings from a study done in the Bangsamoro region of the Philippines showed that many people think that FGM is an Islamic practice and that they do not consider certain types of female genital cutting to be FGM but instead “female circumcision”. “Thanks to a new programme in the region FGM is increasingly being recognized as a harmful practice and is now being replaced in communities by alternative practices without any genital mutilation.

In Indonesia, midviwes practice FGM on new born girls as a part of a “package” where the babies get their ears pierced and are cut at the same time. Contrarily to certain other communities, FGM is more common in urban areas than in rural areas in Indonesia.

In the conclusion, speakers stressed the need for data collection, especially at local and regional levels, in order to implement successful anti-FGM programmmes in the Asian region. Working with local organizations is key to create a space for debates and awareness-raising in communities. The African Union, The Saleema Initiative, UNFPA and UN Women organized a conference on the participation of girls in the work against gender-based violence and other harmful practices such as FGM, entitled “Girls included : Ensuring the Effective Participation of Survivors of Harmful Practices in Decision-making Processes”.

Speakers stressed that Africa is a young continent which needs its young people. Some of the key priorities for Youth participation in Africa are empowering young people, improving infrastructures inside rural communities, especially access to care and justice, as well as ensuring girls’ education. The latter is particularly important in post-Covid Africa as a lot of girls have been taken out of school. During this webinar, they explored the theoretical underpinnings of the Voices to End FGM/C Project, highlighted the success of digital storytelling workshops, and shared how this project has supported women in their healing journey and furthered efforts to prevent future generations of girls from enduring this form of gender-based violence.

Soroptimist International and the North American and Europe CSW Caucus organized an event on the theme “Amplifying The Voices On Ending Female Genital Mutilation”, gathering speakers from the US, Europe and Africa.

You can find a summary of the event on the Soroptimist International website.